Late HIV diagnosis (an HIV diagnosis that does not occur until the CD4 count has dropped below 200 cells/uL) remains common in New York, and represents important missed opportunities for HIV treatment and prevention. Expanded HIV testing coverage could result in people with undiagnosed HIV being diagnosed earlier, thereby lowering the risk of morbidity, mortality and onward HIV transmission. In New York City, one recent study found that increases in HIV testing coverage may have reduced late HIV diagnoses, at least among men.

The figure below is taken from the study by Ransome et al. published in the journal AIDS entitled “Expanded HIV Testing Coverage is Associated with Decreases in Late HIV Diagnoses.” The study involved a longitudinal analysis of aggregate population based HIV surveillance data in NYC. To examine expansion of HIV testing, the absolute change in the percentage of having tested for HIV in the past 12 months was calculated within each neighborhood, using data on HIV testing from the NYC Community Health Survey. Late HIV diagnosis data was derived from the NYC HIV surveillance registry. 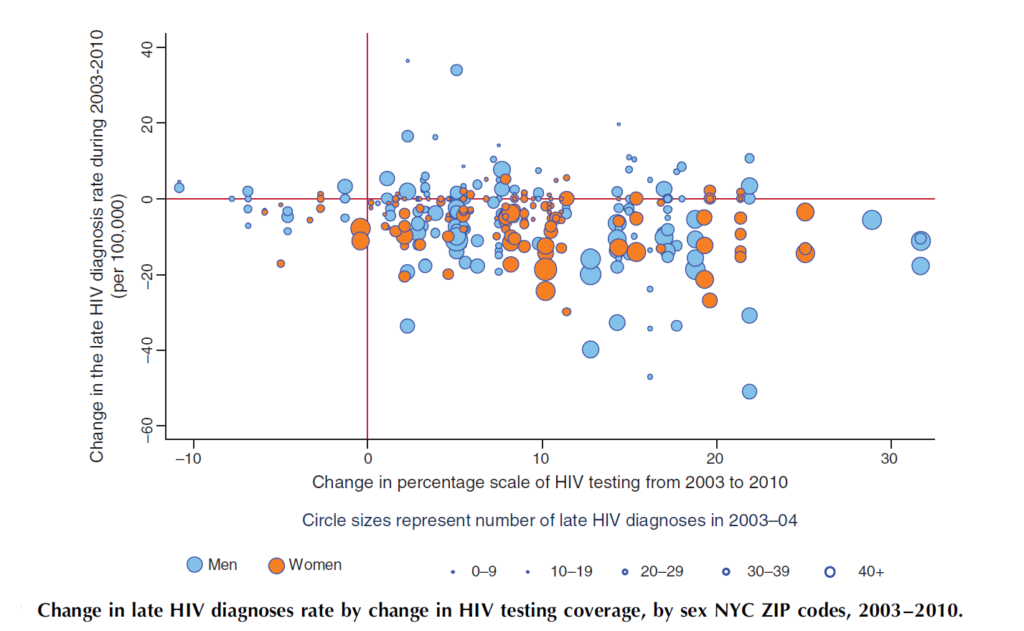 HIV testing is an important component for ending the epidemic, and is included in New York’s three-point plan to End the Epidemic. The first aim of the plan is to identify “persons with HIV who remain undiagnosed and link them to health care.” For additional data on HIV testing in NYS and NYC, visit the ETE Dashboard testing page, which now has new interactive features allowing dashboard users to visualize HIV testing trends in their neighborhood and filter by population subgroup (i.e. sex, age, race).