Timely linkage to care of persons newly diagnosed with HIV/AIDS and consistent engagement in care can lower the risk of morbidity, mortality, and onward HIV transmission.  NYLinks, a NYS initiative designed to bridge systemic gaps between HIV related services in order to achieve improved linkage to and retention in care, created HIV care cascades to track outcomes, specifically for newly diagnosed persons. These cascades (figure below) track the number of new diagnoses made by a NYLinks diagnosing provider in a NYLinks region in a given year, and among those new diagnoses, the proportion of patients who are linked to care within 90 days of diagnosis, the proportion who are retained in care one year after diagnosis, and the proportion who are virally suppressed within 6 and 12 months of their HIV diagnosis. 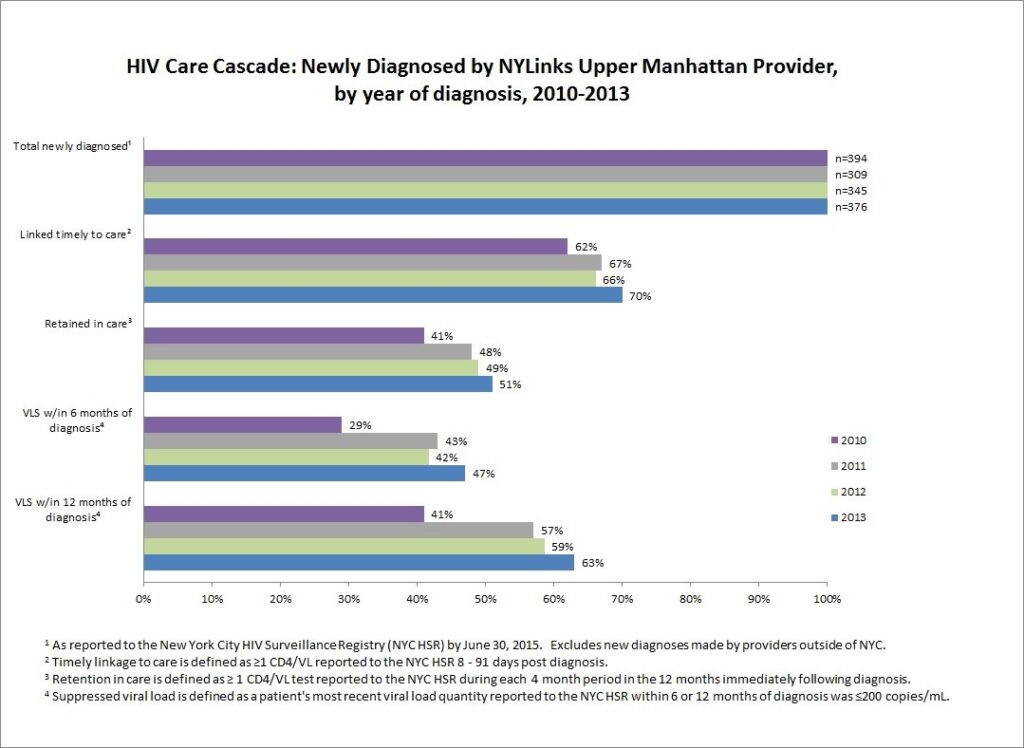 The HIV care cascade among newly diagnosed by NYLinks Upper Manhattan providers shows in general, an increase in each of the measures on an annual basis from 2010 to 2013.  The proportion of these newly diagnosed cases who were linked to care anywhere in New York City within 90 days of diagnosis has increased from 62% in 2010 to 70% in 2013, while retention in care1 has increased from 41% in 2010 to 51% in 2013.  Within 6 months of diagnosis, 47% of individuals who were diagnosed in 2013 were virally suppressed (≤200 copies/mL), and that proportion jumps to 63% when looking out to 12 months after diagnosis.

The use of a separate cascade for newly diagnosed persons allows the ability to examine outcomes among those entering into the HIV care continuum more recently and, by design, incorporates information on the time elapsed between HIV care continuum steps, which is valuable for rapid assessment of the effectiveness of strategies aimed at improving care outcomes.

1 At least one CD4/VL test reported during each 4-month period in the 12 months following diagnosis.